On 23th December 2020, Tokenlon  officially launched the LON token and started the LON liquidity incentive. In April 2021, LON tokenomics was released to the public, and trading mining was launched.  Furthermore, LON holders could stake LON and receive stable returns with each LON buyback.

As the saying goes, time waits for now man, especially in Crypto. How did LON perform in the first year and how much revenue did Tokenlon make? Let's review it together!

Note: In order to ensure objectivity and fairness, most of the following data are quoted from third-party data sources. Data is accurate as of 23th Dec 2021.

During the first year, the number of LON holders continued to grow and it broke 50,000. The total supply of LON has not reached the hard cap. 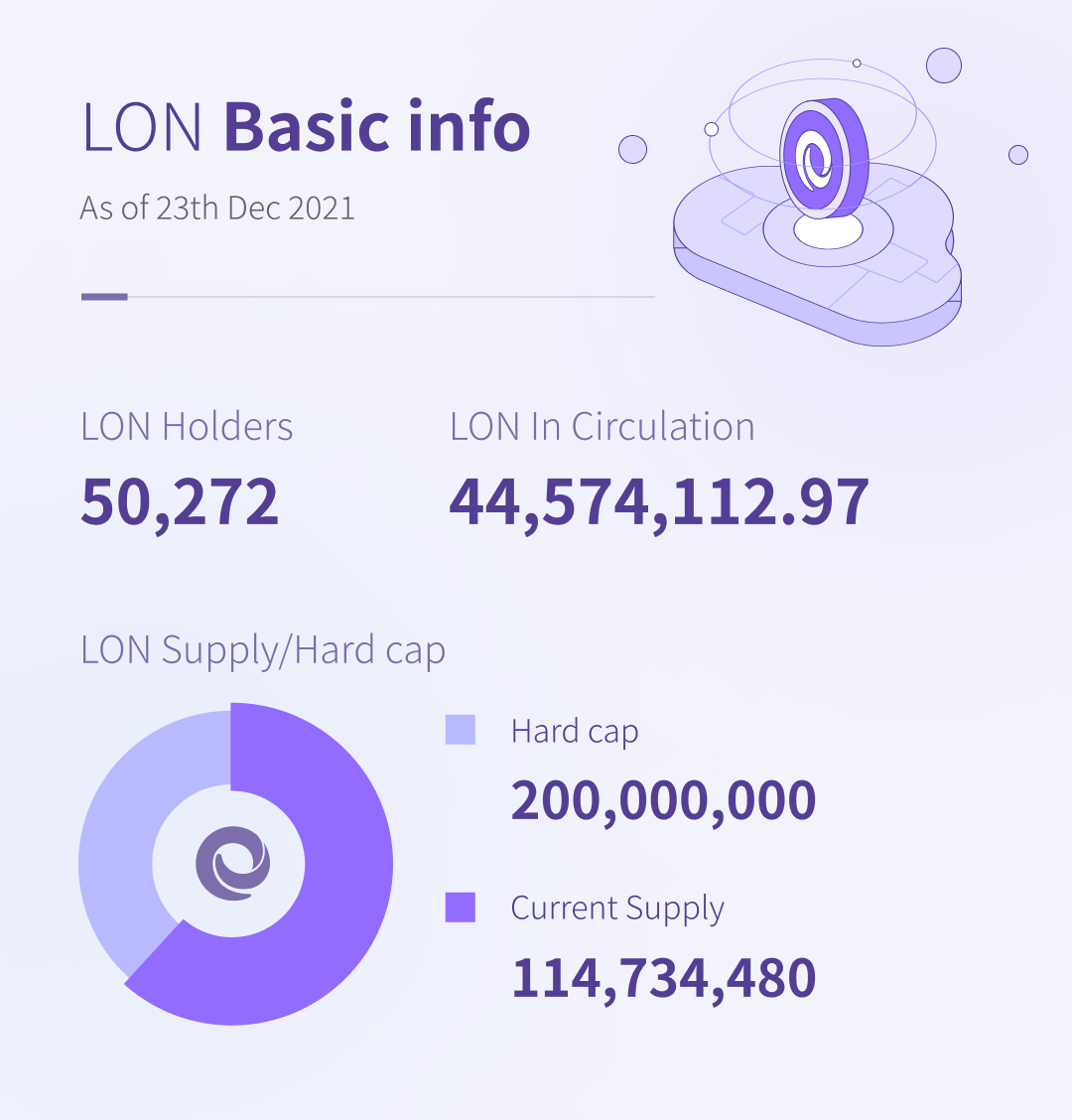 According to information from CoinGecko, over 15 platforms listed LON, including the Top 3 DEX and some CEXs. 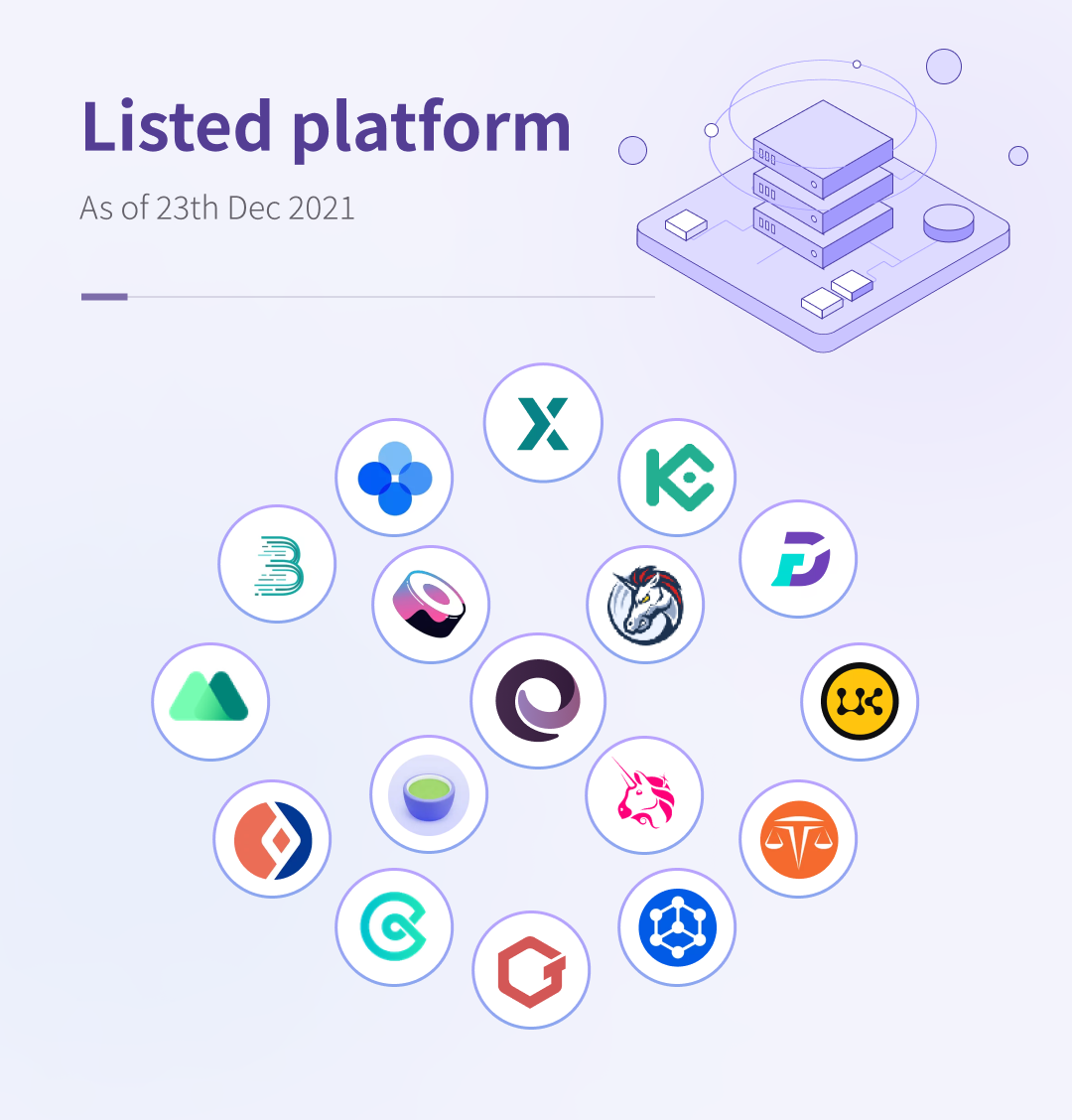 LON trade mining plays an important role in LON tokenomics. More trading volume means more revenue that Tokenlon generates. In turn, more LON rewards will be distributed to traders and it encourages them to trade more via Tokenlon, creating a sustainable ecosystem.

At the same time, part of the revenue will be distributed to users who join LON staking, with each LON buyback triggered. 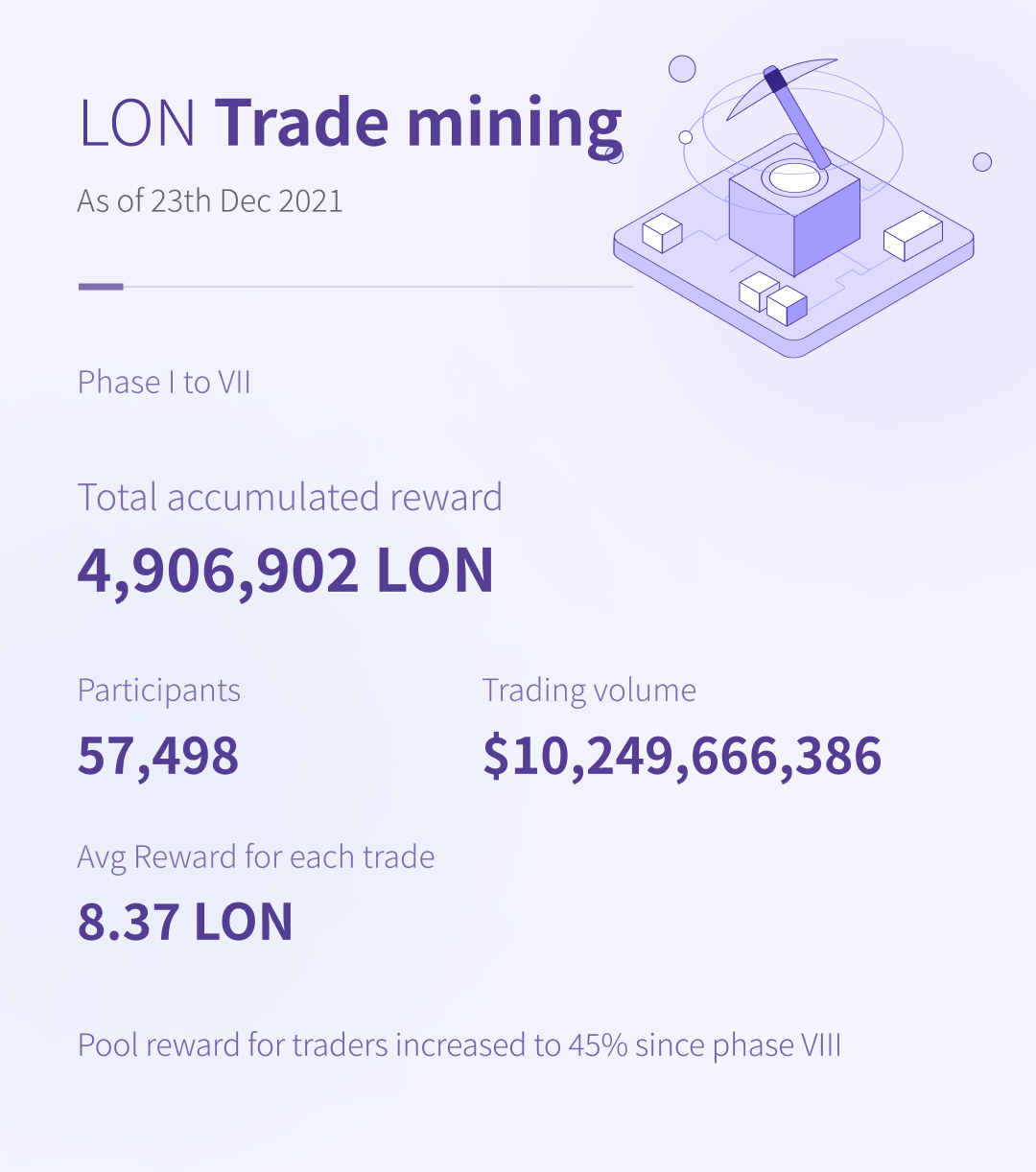 LON staking is probably the most popular feature among LON holders, with the number of  LON staked and participant addresses proving that. It is an ideal choice for long-term LON holders who can stake their LON to earn stable rewards without impermanent loss. 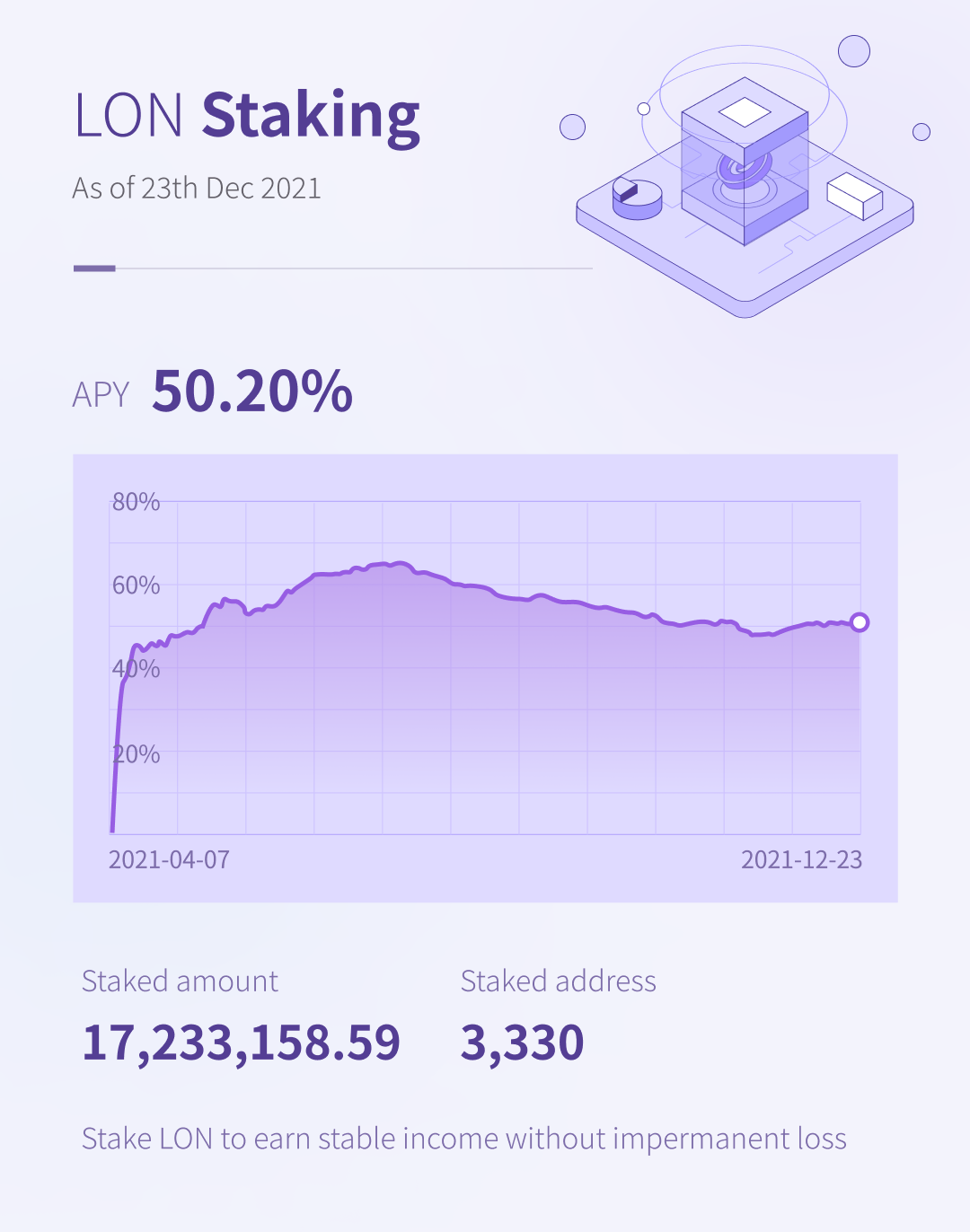 To make LON buyback more transparent, the process is designed to run on the chain instead of off chain from the very beginning and anyone can trigger it.

As the gas fees on Ethereum rose rapidly, the cost for triggering buyback increased significantly. To continue encouraging buybacks,the community suggested using the treasury to reimburse a part of the gas fees incurred to whoever triggered the buyback. 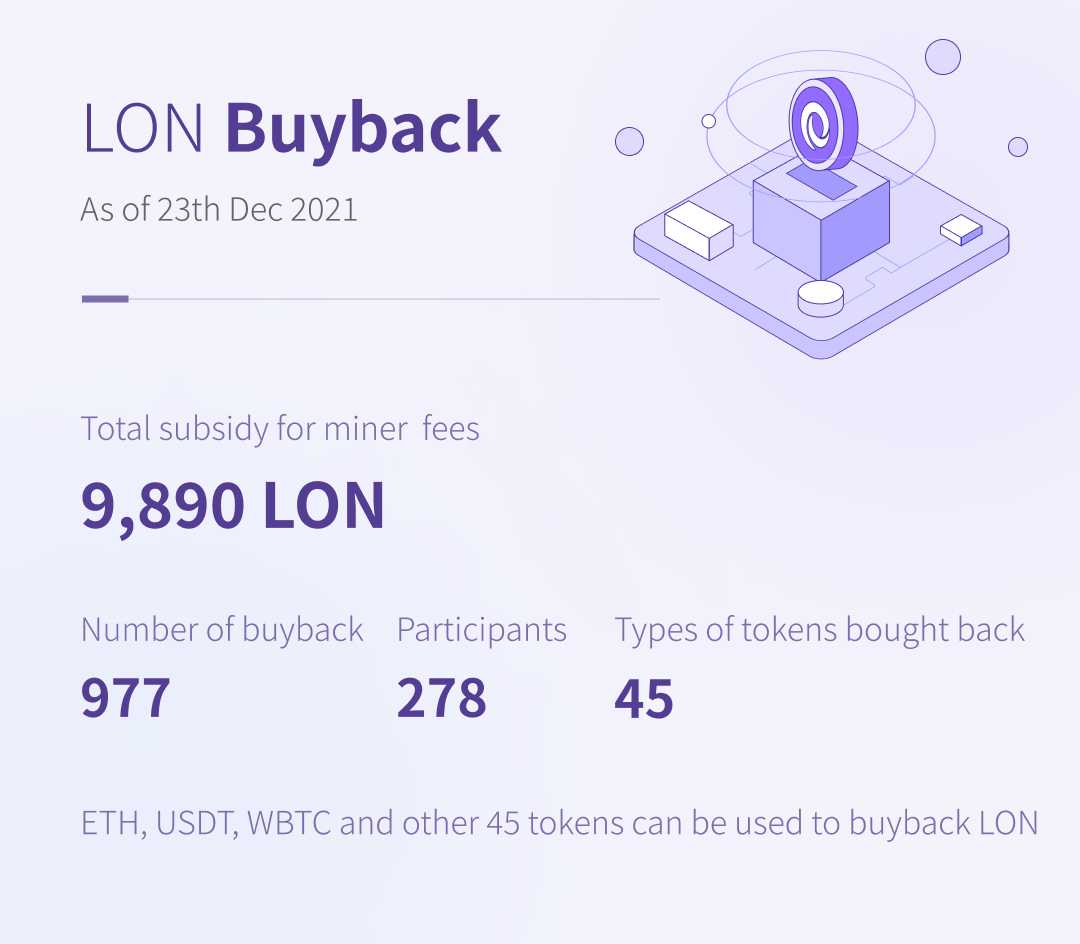 Although the LON liquidity incentive has ended, it ensured the health of LON liquidity on the AMM pool, before the core team moved to a protocol owned liquidity.

At present, the overall liquidity of LON is relatively healthy. The core team will always pay attention to the liquidity of LON to ensure that users get the best trading experience when using AMM protocol to trade LON.

The accumulated trading volume of Tokenlon broke the $2.2 billion mark, with the volume generated after the launch of v5.0 accounting for 71.3% of total volume. 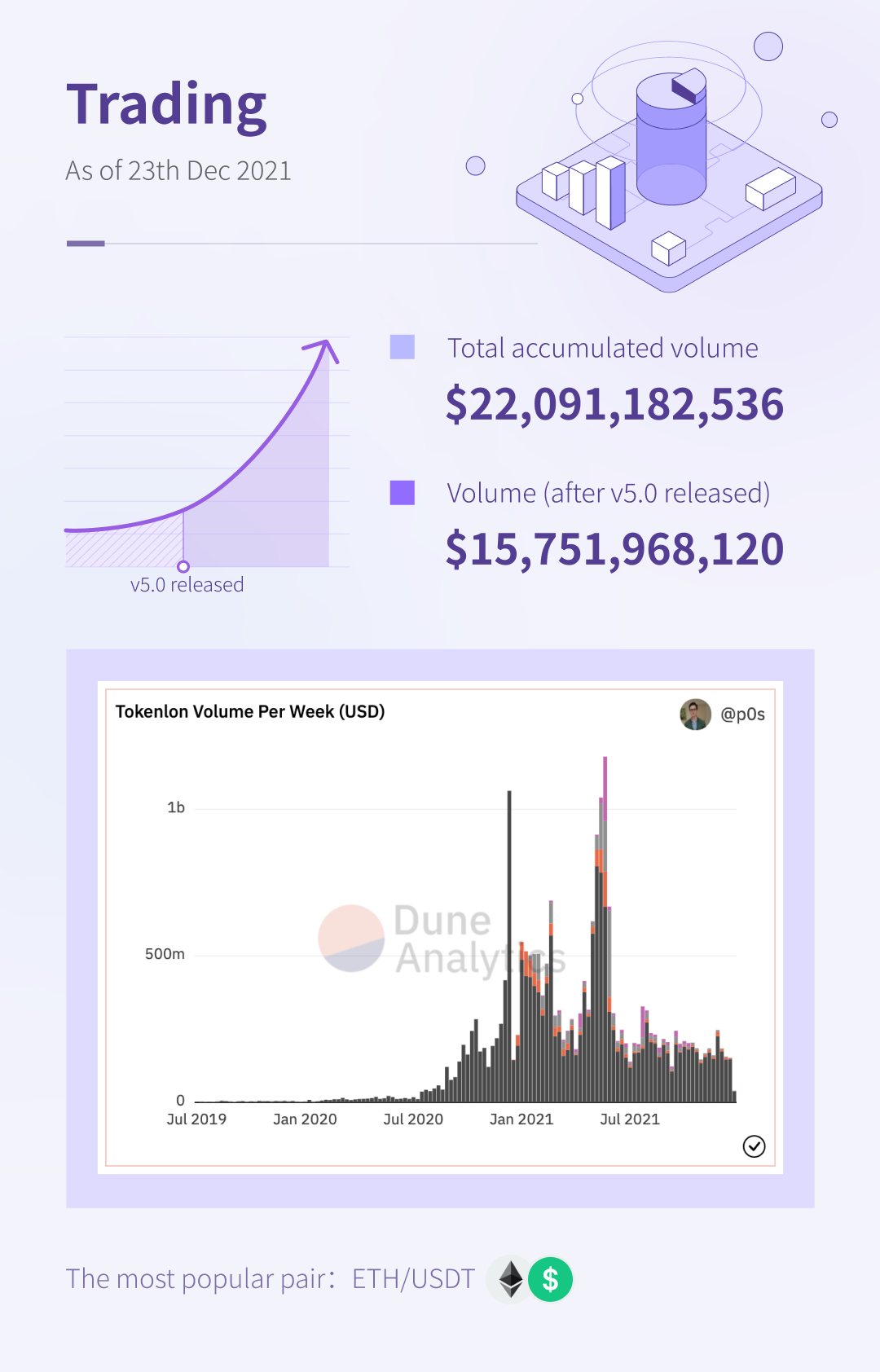 In order to be consistent with the data standard of platforms such as Token Terminal,  Tokenlon calculates the value of the trading fees, using historical price. (i.e. the price at the time of the transaction) 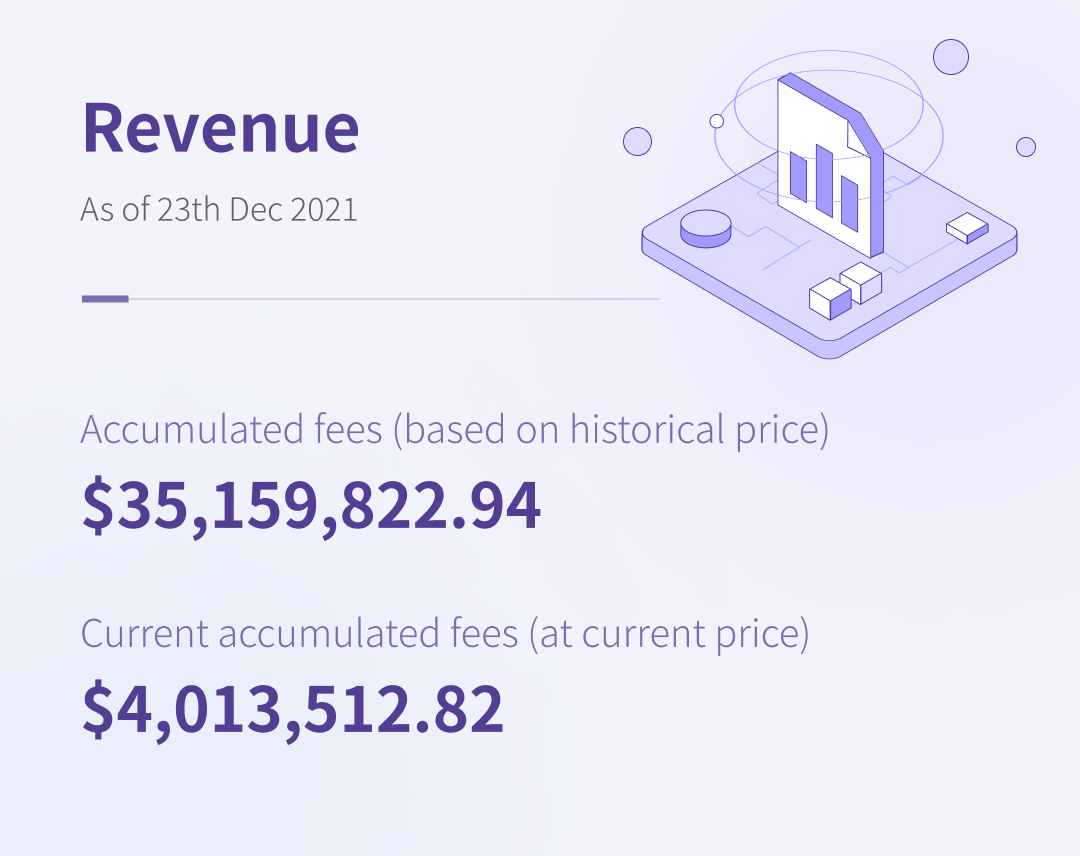 Whereas the cumulative income from trading fees is calculated at the current price and is about $60 million.

Providing more tokens to the trader is the best and the simplest way to improve the trading volume. Tokenlon has now listed 545 tokens and the number will definitely increase after the integration of Uniswap V3. 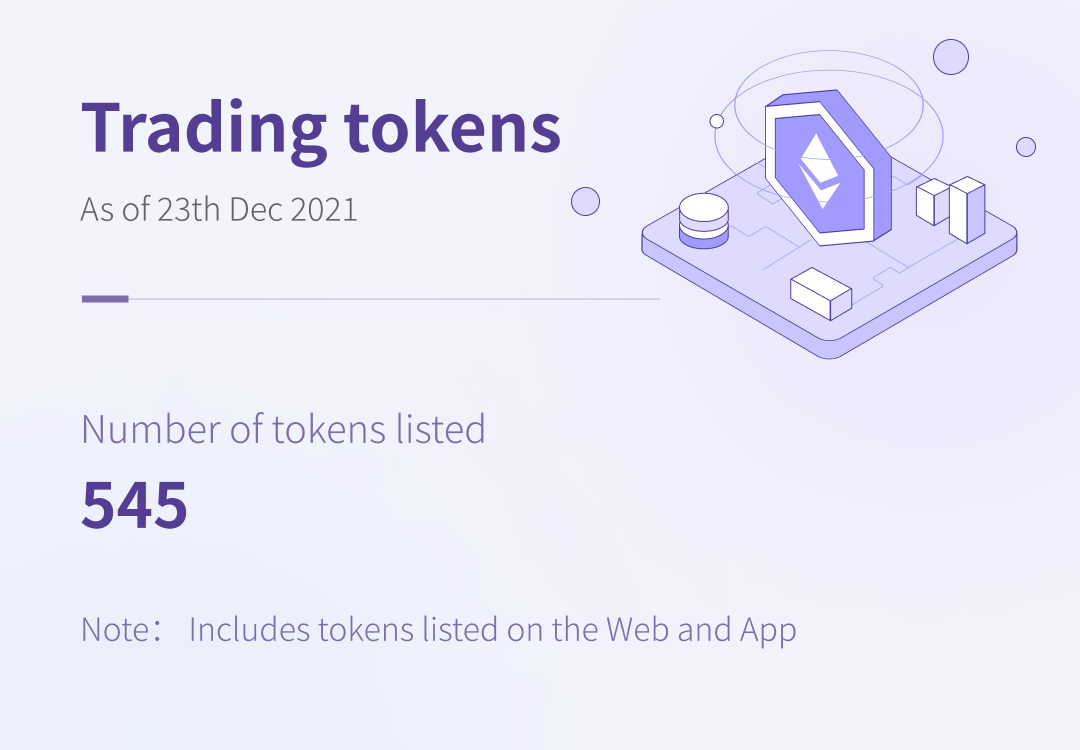 In the recent year, 26 Tokenlon improvement proposals (TIP) have been proposed in the community.

To thank those who made contributions to Tokenlon, a thanksgiving airdrop campaign will come to you soon. Keep a lookout for the list that we will publish soon!

At present, both the protocol and community hold the same view that the cost of trading on Layer1 is very high. Therefore, the migration to Layer 2 is imminent, and it is also very important to choose a stable Layer 2 solution. At present, from the perspective of TVL, Arbitrum is our preferred choice.

In the future, Tokenlon will also focus on overseas markets, improve the Web transaction experience and build features such as limit order, etc.

At the same time, we will remove the minimum transaction amount requirement and allow users to choose whether or not to let Tokenlon broadcast the transaction.

We will launch a real-time AMA event at Tokenlon Discord in the coming days! In addition to the core team members, we will also invite imToken founder Ben and imToken Head of Labs  Changwu to answer your questions about the future development of Tokenlon and even their thoughts on the direction of the entire industry.